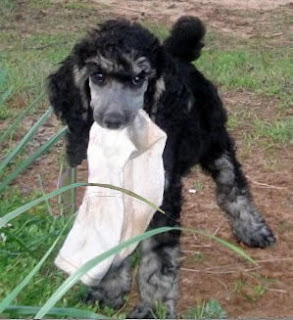 Raleigh was “improperly socialized.” I know this because several experts told me. The exact details of his upbringing remain a mystery but I have deduced the following from Raleigh’s behavior.
Raleigh was raised in a barn where he lived quite happily with his birth mother and littermates. The puppies spent their days doing puppy things with no bothersome interference by humans. Except for one hour every day when Breeder Mom instructed her young sons, “Go socialize the puppies or I’ll make you do your homework.” Young sons, hands sticky with the remnants of peanut-butter sandwich, let the puppies out of the barn into the back yard. The puppies spent their social hour chewing on the small boy’s sweaty socks. Apparently Breeder Mom prohibited the wearing of socks while jumping on the trampoline. This much, at least, was substantiated by a video Breeder Mom sent to me just before I drove all the way to Nacogdoches in a stupefying cloud of “puppy love.”
Puppy books tell of an all important four-week developmental window of socialization when a puppy will learn all that he needs to navigate his world as a polite citizen. Raleigh spent these four weeks barking, chasing and rolling around in a horse stable with his maladjusted siblings.
On the very day his developmental window slammed shut, Breeder Mom bathed and trimmed Raleigh and loaded him in her SUV. She drove him to the Texas/Louisiana border to meet his new mother, me.
I have read at least a dozen books about puppies. I noticed right away that Raleigh would not look me in the eye and cringed when I reached for him. When clipped on the end of a leash Raleigh sat his furry butt down and refused to budge one inch. These were very bad signs. Breeder Mom chattered away happily during the entire transaction, as she had received payment for Raleigh via PayPal days earlier.
Despite enough red flags to populate a Soviet parade I snatched Raleigh up and drove home to Houston with him because he was – amazingly – even more adorable in real life then in his picture.
Posted by T Blog at 8:41 AM

Promote Your Page Too

Put your dog's photo on your bag!