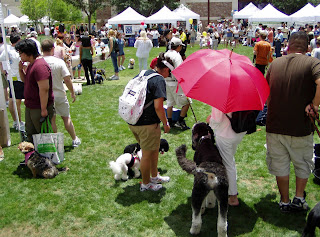 Somebody counted 1,200 dogs! Raleigh was barked at only once by a white standard poodle. They were sniffing and I guess she didn’t like his attitude. She gave one sharp warning bark and Raleigh backed up, chagrined. The four of us owners laughed about it. Other than that everyone was calm and easy to get along with. Including Raleigh! It was a shock. Raleigh is good in crowds of people but near-uncontrollable around other dogs. In the car as we made our way to the parking garage Raleigh spotted a Jack Russell Terrier. He jumped around and whined like he had seen a squirrel coated in peanut butter.

“This is going to be a disaster,” I said to my husband.

I imagined Raleigh and I walking back to the car with our tails between our legs, banished for being the worst socialized participants at the party.
But it wasn’t like that. Raleigh saw in one glance a hundred well-behaved dogs on leashes. I think they conveyed the standard for how one acts at dog parties and, in typical poodle fashion, Raleigh caught on pretty quick.
It’s possible his experience the day before during a walk in the park left a mark on him. He had spied a four month old “golden doodle” puppy and began jumping around like he had to have it or he would die. I put him into a sit/stay time out until the puppy was out of range and Raleigh was calm again. I always do this but maybe Friday’s lesson tipped the balance. He remembered the consequences and didn’t want to end up in an embarrassing time out in front of 1,200 of his peers!

Acting on hope alone, I walked him right into the fray pretending I had a well-behaved dog at the end of my leash. He crouched a little as we merged with the crowd. I could feel his doggy tension climb up the leash and into my arm. His body language said, “What’s going on here?” But within seconds he relaxed. “This is fun,” I felt him say. Soon I was confident enough to let him do some sniffy greetings with other dogs. Everyone was fine. 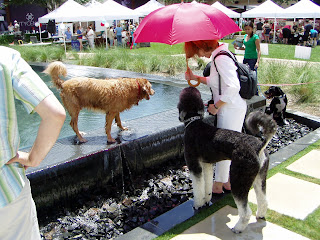 We didn’t arrive at Town Centre until a little after one pm. The party was in full swing. The costume contest was about to begin. It was a bright, sunny, May day and consequently - hot! I was glad to have my red umbrella. Waiting for the contest was a big black Rottweiler. I’m sure his owner appreciated how hot black fur gets in direct sunlight but she was working against the clock dressing him for the contest. Raleigh and I shared our umbrella-shade with the barrel-chested rotty while his owner finished his transformation into a construction worker. His costume included a low slung tool belt, hard-hat and goggles. If anybody reading this has photos let me know, I want to link to them! 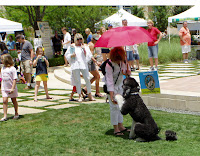 Soon after the costume contest was a “trick” contest. At the very last minute, on a whim, I signed us up. I figured even if we came in last it would be a valuable learning experience. It would give Raleigh a chance to perform in public. Lucky for us there were only six entries but there were some darling tricks including a face-in-your-paws prayer and rolling in a blanket (we captured Wilson’s blanket trick on video). Raleigh and I were the last to perform and I was worried our standard fare of sit, stay, shake hands, down, relax and stand was a little lame. But Raleigh came off confident and poised and we ended up with a fifty pound bag of second place prize bootie!

After that we were psyched. We visited many booths and collected a good assortment of free samples. We greeted dogs and little kids and checked out all the water bowls. Raleigh laid claimed to the one on the northwest corner. For some reason none of the dozens of other bowls graciously set around the place met his fussy poodle standards. 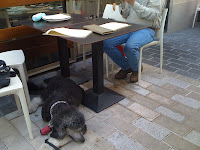 After an hour and a half we were hot and a little tired. It was a good time to buy our “pup”arazzi an order of spring rolls and a beer. The Yard House Restaurant had a lovely patio area but didn’t allow dogs. How totally un-dog friendly was that! They get a “tails down” on the Raleigh Rating Meter. But next door at the Straits Restaurant the four-leggers were not only welcomed but were supplied with bowls of cold water. “Tails-up” for them!

And a big “tails-up” for the two-leggers at Pet Talk magazine. Thank you for providing Houston’s excellent dogs with a great party. We had a wonderful time! If Raleigh and I can ever do anything for you let us know.
Posted by T Blog at 9:00 AM

Promote Your Page Too

Put your dog's photo on your bag!